By Vitor Gaspar and Luc Eyraud

Public finances have had a rough year. A new reality is emerging. Against this backdrop, countries need to act now to boost growth and build resilience. They must also be prepared to act together to fend off global risks.

The April 2016 Fiscal Monitor shows that public debt continues to rise in every corner of the world. Fiscal deficits have also gone up in many countries. In advanced economies, once again, we will have to wait another year for debt ratios to decline. On average, public debt now exceeds the level observed during the Great Depression and is approaching the level immediately after World War II (Chart 1). 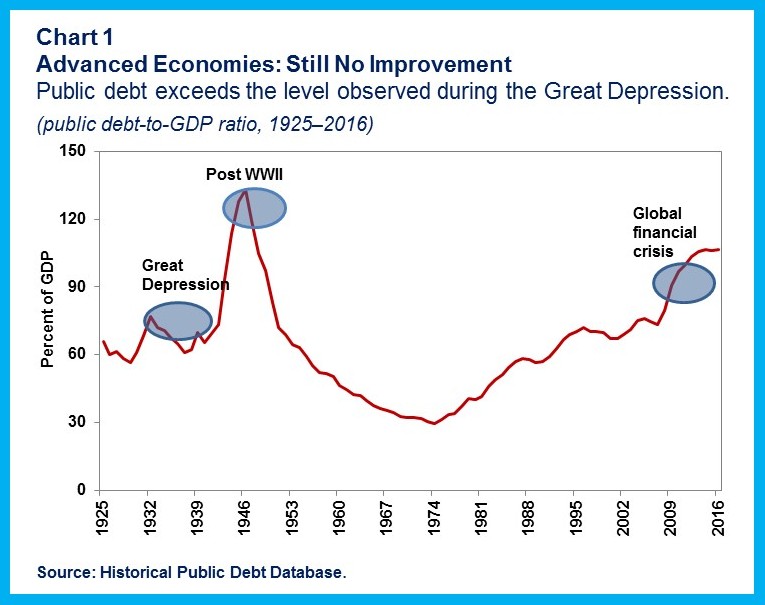 In emerging markets and low-income countries, fiscal deficits in 2016 are projected to be even higher than in 2009 during the global financial crisis. This represents a big shift compared to what we expected about a year ago; there’s been a large jump in future public debt ratios (Chart 2). The fiscal positions of commodity exporters have been especially hard hit because of the collapse in revenues. In the Middle East and North Africa, the cumulative fiscal balances of oil exporters alone are set to deteriorate by a staggering $2 trillion in the next five years, compared to the pre-crisis period 2004–08 (Chart 3).

Fundamental and far-reaching trends of the global economy are affecting public finances everywhere. These transformations include continued weakness in global activity and entrenched low inflation pressures in advanced economies, the decline in commodity prices (about 35 percent in the past 12 months and 65 percent since mid-2014 for oil), and the slowdown in trade. Emerging market and developing economies are also facing higher interest rates and dwindling capital inflows. Risks are also rising almost everywhere. These changes look like they are here to stay, at least for some time. 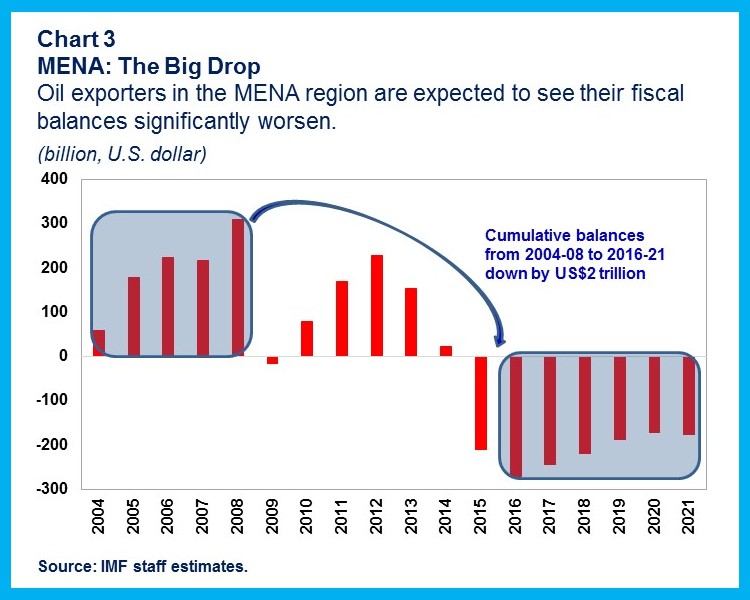 Countries need to adapt to these new realities but “no one-size-fits-all.” The appropriate policy response varies across countries, but the exact mix of measures depends on the nature of the fiscal challenge they face. We identify three main challenges.

Advanced economies are facing the triple threat of low growth, low inflation, and high public debt. This combination of factors could create self-reinforcing downward spirals. By this, we mean that continuous downward revisions in growth and inflation are associated with upward revisions in public and private debt as a share of GDP. This may lead governments, firms and households to cut spending in order to lower debt, depressing further economic activity and inflation.

To avert falling into such a trap, countries should follow a three-pronged approach based on expansionary monetary policy, growth-friendly fiscal policy and productivity-enhancing structural reforms. By growth-friendly fiscal policy, we mean measures that boost growth both in the short- and the medium-term (such as higher infrastructure investment) and policy actions that support the implementation of structural reforms. One example of this is using public funds to compensate those that lose from reforms (such as reforms promoting greater competition) and who could block their adoption.

In countries with fiscal space, the budget could also do more to support aggregate demand. Many countries lack this fiscal space and, of course, how much countries can do to support demand will depend on individual country circumstances—particularly on their debt level and current and future borrowing costs. In some cases, countries will not be able to slow down fiscal adjustment. But even in these circumstances, governments should protect growth by avoiding cuts to highly productive public spending and scaling down less efficient programs instead.

And what if the macroeconomic situation gets worse? What should countries do if there is a large slowdown in global growth and intensifying deflationary pressures which could precipitate the world economy into the downward spirals that we have just described? Then individual country’s responses would not be sufficient. Policymakers should act quickly and act together to fight the stagnation forces and deploy coordinated policies across the major economies of the world. The international response should combine growth-friendly policies on the demand and supply sides. It is particularly important that countries act simultaneously, because the beneficial effects from each country’s policies would be amplified. Of course, some economies would not be able to participate in the coordinated policy response, in particular those under market pressure. But they would still benefit indirectly from higher growth elsewhere through stronger trade and improved global stability.

Challenge 2: Addressing the big and lasting drop in revenues

Between 2014 and 2016, about two-thirds of all countries experienced a decline in their revenue-to-GDP ratios (Chart 4). Commodity exporters saw the largest revenue shortfalls—an average of 7 percent of GDP for oil exporters. As commodity prices are likely to remain low for some time, producers have no choice but to reduce public spending and align it with lower revenues. Nonetheless, this unavoidable adjustment can be made less painful by mobilizing non-commodity revenues and cutting poorly targeted and wasteful spending, including by reforming fuel subsidies. Countries that have accumulated financial assets in the past and are under less pressure from financial markets will be able to consolidate at a more gradual pace.

Almost half of the low-income developing countries have a tax ratio below 15 percent of GDP. Low revenue mobilization is an important impediment to economic development not only because it limits the ability to fund pro-growth spending but also because a low tax ratio is often associated with a lack of institutional capacity, which is essential for growth to take off. Thus, adequate revenue mobilization is a fundamental component of a growth and development strategy.

Building up a minimum tax capacity can support and complement broader state and legal capacity. In particular, stable taxation that is broad-based and governed by clear rules, is necessary for an effective budget process. Combined with improvements in expenditure efficiency, better revenue mobilization can help achieve the Sustainable Development Goals, including by enhancing the provision of health and education services and developing infrastructure. In practice, low-income countries should explore possibilities for raising new forms of revenue (for instance, by introducing or expanding the value added tax or the property tax) and strengthening tax compliance—two areas in which the IMF provides extensive technical assistance.

Beyond the country-specific immediate policy responses outlined above, there are two main objectives that all countries should pursue over the medium term:

In sum, countries face big challenges in restoring vigorous growth, and healthy and resilient public finances. But the good news is that policymakers, individually and in concert, still have adequate policy tools to address these challenges and adapt to the new realities.