The Effects of Wage Moderation: Can Internal Devaluations Work?

By Jorg Decressin and Prakash Loungani

Devaluation is often part of the remedy for a country in financial trouble. Devaluation boosts the competitiveness of a country’s exports and curtails imports by making them more costly. Together, the higher exports and the reduced imports generate some of the financial resources needed to help the country get out of trouble.

For countries that belong to—and want to stay in—a currency union, however, devaluation is not an option. This was the situation facing several euro area economies at the onset of the global financial crisis: capital had been flowing into these countries before the crisis but much of it fled when the crisis hit.

A remedy for these economies that has generated a lot of debate is so-called internal devaluation. This is a boost to competitiveness not through an (external) devaluation of the currency but by internal means, such as wage cuts or wage moderation.

Can such internal devaluations work? Our recent paper provides an answer.  The main take-away from the paper is that, if undertaken by several crisis-hit countries at the same time, wage moderation can only work well if supported by accommodative monetary policies. In the absence of such policies, wage moderation does not deliver much of a boost to output in the countries that are undertaking it, and also ends up lowering output in the euro area as a whole.

The start of an answer

The specific policy considered for simulations purposes in our paper is a 2 percent reduction in wage (and price) inflation. While wage moderation does boost competitiveness and exports,  its overall effect on output in the short run is uncertain. The reason is lower nominal wage growth and lower inflation—or possibly deflation—can suppress domestic demand and increase the real burden of debt. So the competitiveness and aggregate demand effects work in opposite directions.

To determine which effect prevails in the short run, our paper uses a large-scale model of the world economy. The model contains individual blocks for 11 euro area economies, including the five economies that suffered large capital flight, which we refer to as the ‘crisis-hit’ economies.

The model simulations show that whether the competitiveness or demand effects dominate in the short run depends on two important factors:

These two factors also play a key role in determining the spillovers from wage moderation, namely, the impact that wage moderation by a country (or a set of countries) has on other countries, in particular on the rest of the euro area. 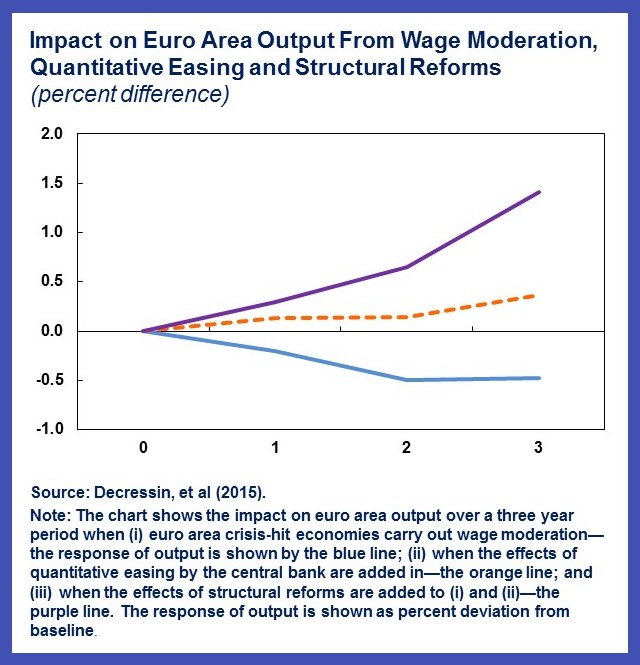 The rest of the answer

Things change when policy interest rates are lowered to zero, that is, they hit the zero lower bound. When this happens, the negative impact of wage moderation in the crisis-hit economies on output in the other economies cannot be offset by a cut in interest rates. Unless other actions are taken to lower long term interest rates, euro area-wide output contracts in the short run.

But wait, there’s more. If, additionally, the European Union economies implement the structural reforms they committed to under the Group of Twenty initiative launched by Australia in 2014, output increases further. Importantly, structural reforms that boost productivity have a stronger, supportive effect on consumption and investment in the short run than reforms that boost labor supply.

How does IMF advice stack up?

The IMF has always advocated a comprehensive package that addresses both aggregate demand and aggregate supply. On the supply side, IMF advice has emphasized structural labor market reforms, with a view to lowering natural unemployment or raising labor force participation. IMF staff advice has also underscored the benefits of structural reforms. On the demand side, the IMF was one of the early advocates of supportive monetary policies, including quantitative easing, to boost aggregate demand in the euro area.

An explicit incomes policy to engineer an internal devaluation has not been part of any IMF-supported program for euro area countries. Our results emphasize that if such policies are considered in a set of euro area crisis-hit countries, the adverse spillover effects on output in the rest of the euro area should be kept in mind.