Trading Out of Trouble in Latin America

(Versions in Español and Português)

Growth in Latin America and the Caribbean is suffering a double whammy—economic activity has slowed down sharply and the medium-term outlook continues to deteriorate. It is therefore not surprising that policymakers across the region are eagerly searching for ways to revitalize growth.

One answer may be more trade—both within the region and with the rest of the world. Our new study analyzes the export performance in developing and emerging market regions over the past two decades to assess the potential for future export growth in Latin America. We find evidence that most countries in the region “undertrade” compared to what standard models would predict. This has been an entrenched problem for almost a quarter of a century, partly as a result of the region’s geography and a legacy of protectionist policies.

We argue that integration into multi-nation production processes (in other words, global value chains) and trade agreements could help, but they are far from magic bullets, particularly in the current global environment. Latin American authorities need to design policies that will increase the competitiveness of their exports and allow them to penetrate large markets, typically in advanced economies.

To estimate trade performance, we identify trade intensity gaps (or export gaps) in the region for the period 1990–2013. We look at variables such as geographic distance, economic size, and certain historical or cultural features. The “unexplained” part of exports—which is the difference between actual and predicted exports—represents the positive or negative export “gap.” The gap tells us whether a country is overtrading or undertrading given their fundamentals.

Compared with the rest of the world, Latin American countries are on average undertrading (see Chart 1 and 2), especially South American countries. Moreover, Latin America has not improved its measured export performance over the past two decades, which stands in stark contrast with the performance of emerging and developing Asia. Our findings apply to both gross exports and value-added exports––a concept that has become increasingly popular in order to strip out the foreign content of exports, which is large when countries use many foreign intermediate goods to produce exports. Our results indicate that Asia overtrades both in terms of gross exports and in value-added terms, so its strong performance in gross exports does not rely solely on the foreign content of exports. 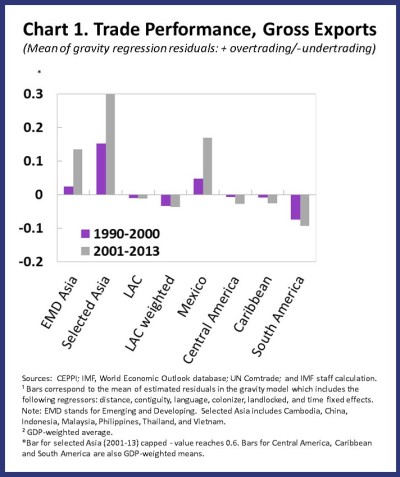 There are, however, important differences across the region (see Chart 3). Mexico stands out for its overtrading in gross exports, but shows a much weaker performance in value-added exports. These results are overwhelmingly driven by the bilateral trade flows between Mexico and the United States, consistent with strengthening supply chain linkages (for example, in the auto industry) between these countries.

Chile is also a strong trade performer. This is heavily influenced by links with China, as expected, but Japan and Korea also appear as important export destinations. Despite having a narrow export base, Chile appears to have been able to increase the volume of exports, which cannot be said about other commodity exporters in the region.

Argentina, Brazil, and Colombia have the weakest trade performance in Latin America. In the cases of Argentina and Brazil, weak exports to major advanced economies––particularly the United States––is a key contributing factor. For Colombia, weak exports to Mexico and Brazil play an important role. Other countries display small deviations of export performance from what would be consistent with economic fundamentals. Venezuela stands out as an “overtrading” country in value added terms. This is because Venezuela exports more oil, which has high domestic content, than would be predicted given fundamentals.

To assess whether greater trade integration could promote Latin American exports, we augmented our model to include variables related to global value chains and trade agreements.

The results indicate that stronger global value chain integration at the country-level leads to improved bilateral performance in the region both in gross and value-added exports. However, the direct short-term impact is economically small. This suggests that trade integration alone is not sufficient to deliver an immediate boost to trade. To reap long-term gains, Latin America needs to leverage global value chain trade to promote knowledge spillovers and innovation, a long-standing challenge for the region.

We found mixed results regarding the benefits of trade agreements, suggesting that their impact hinges fundamentally on design and implementation characteristics of accompanying reforms and the agreements themselves.

Despite policy efforts in Latin America to lower trade barriers, the region has remained more closed than other emerging market regions and most countries are undertrading. While remaining realistic about the potential for significant improvements, here’s how some policies can help: