China is moving toward a “new normal” of safer and more sustainable growth.  To this end, ensuring its labor market stays resilient will be critical.  Reforms to contain vulnerabilities caused by buildup of credits may temporarily slow growth, and raise the unemployment rate, but supported through a strong safety net, these reforms will raise productivity, and facilitate more sustainable growth.

Despite the slowdown of the past few years, however, China’s labor market has remained resilient.  Efforts to maintain labor market stability are paying off, helped by an expanding services sector.

Although high-frequency employment indicators in the purchasing managers’ indices (PMI) showed signs of softening up to August 2015, labor market conditions appear to have held up well in the broader context, even as the economy slowed.

Newly-created urban jobs reached 13.6 million in 2014, and the first half of 2015 saw an additional 7.1 million new urban jobs created—on track to reach the government’s official target of 10 million new jobs for the year (Chart 1). 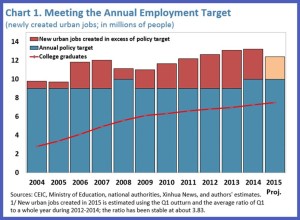 While wage growth has been slowing, it remains about 8 percent in the first half of this year, largely in line with nominal GDP growth. And migrant and urban workers have been enjoying similar gains, while the official registered unemployment rate held steady at about 4 percent, as did the surveyed unemployment rate (at about 5.0-5.1 percent).

What has contributed to this resilience?

In the recent IMF working paper, China’s Labor Market in the “New Normal”, we find that long-term trends, such as urbanization, tend to support employment growth.

The expanding services sector is a key factor. It is usually more labor-intensive than other sectors, creating jobs for people from rural areas. Indeed, the sector accounted for close to 40 percent of the labor force and contributed to 48 percent of value-added in 2014, surpassing manufacturing. Less surplus labor from demographic changes such as labor force growth also reduces the pressures on employment.

At the same time, unique features in China’s labor market warrant special attention. Among these, the first two—migrant flows (that is, rural labor moving to urban centers), and continued and potentially increasing surplus labor, especially in large state-owned enterprises (SOEs)—might serve as buffers during economic slowdown, even though they also raise concern. The third, data shortcomings, simply makes an assessment of labor market conditions more challenging. 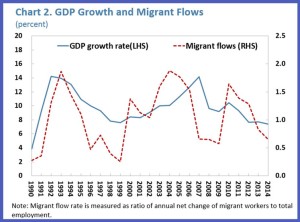 It is true that implementing reforms will likely slow near-term growth further. But will it pose risks to the labor market? Our analysis gives a clue. We think the risk is modest and would be worth taking.

Our analysis suggests that, with steadfast reform implementation and medium‑term growth staying around 6–6½ percent, net urban employment could stay near 10 million per year—meeting the government’s current policy target.

To be sure, stepped-up SOE reforms and adjustment in sectors with overcapacity would, in the near term, release excess labor, and push up the unemployment rate. However, this would facilitate structural transformation—including service sector expansion, and new investment in productive enterprise—toward a more sustainable growth path (Chart 3). Instead of maintaining employment levels in these industries, well-targeted, on-budget support to affected employees would facilitate the transformation while providing an effective social safety net.

In contrast, as highlighted in the 2015 IMF report on China, delays in reform implementation would build up vulnerabilities, weaken long-term economic prospects, and potentially worsen unemployment over the medium term.

The tradeoff is therefore obvious. Continuing reforms to a sustainable growth path are key to maintaining labor market resilience.

Blogs in Other Languages