By Giovanni Ganelli and Naoko Miake

Take a walk in Tokyo, and you will see the sign スタッフ募集中, or “Staff Wanted”, outside many restaurants and convenience stores. These businesses often find it impossible to recruit the workers they need. According to recent statistics, for each job seeker in Japan applying to work as a waiter, there are more than three available positions. Home helpers and long-term caregivers are equally in demand. If you want to work as a security guard, you can choose from around five openings, and for some positions in the construction business the job-to-applicant ratio is over six.

Japan’s labor shortages are the result of both a shrinking population—which limits the overall pool of workers—and skill mismatches. The reduced supply of labor is one of the factors bringing down medium-term potential growth, which the International Monetary Fund estimates at just 0.6 percent. Labor market shortages are also bad for short-term growth, because they reduce the effectiveness of the monetary and fiscal stimulus that the authorities are using to try to boost demand.

Japan’s shortages are large from an international perspective. The ratio of job vacancies as a percentage of the labor force population—an indicator of labor shortages—stood at 3.2 percent in 2013 in Japan.  The same figure is 1.1 in Germany and 2.5 in the United States.

Against this background, our recent research paper looks at possible policy solutions.

In several of the above areas, progress is underway. Ongoing corporate governance reforms, for example, are expected to encourage investment, and the recent increase in female and elderly labor participation can help reduce shortages. Current efforts to encourage wage growth, for example through the Tripartite Commission, can also help attract more workers in the labor force. In addition, Japan could consider further deregulation, and devoting more fiscal resources to active labor market policies.

Increasing the supply of foreign labor, however, has received less attention in the policy debate, even though there seems to be scope for it. Low historical immigration rates are reflected in the fact that Japan’s reliance on foreign labor is only 0.3 percent—the lowest among advanced countries. 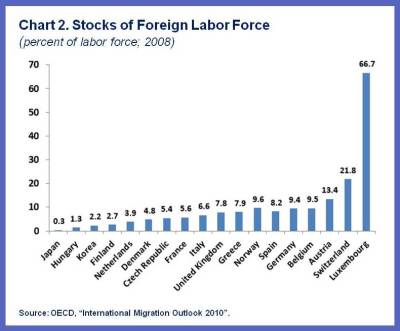 While these measures go in the right directions, they will have only a limited impact in reducing labor shortages, particularly in the most severely-hit sectors such as construction, security guards, services, and nursing.

Drawing on the experience of other countries, Japan could consider some additional steps to attract more foreign workers, such as introducing guest worker programs, and loosening entry requirements in sectors with labor shortages—including for lower-skilled jobs. Japan could move in the direction of policies adopted by other countries, such as Australia, Canada, Singapore, South Korea, which use quota systems aimed at making decisions on admission of foreign workers on the basis of economic needs.  It could also consider allowing certain industries—as the mining sector in Australia does—to enter into direct agreements with the government to fill labor shortages. Introducing a uniform and comprehensive qualification framework to perform skill accreditation would also help.

One possible political obstacle to expanding the foreign labor supply is the fear that the social costs of immigration will outweigh the benefits. Anecdotal evidence suggests this is a widespread fear, but there are very few official estimates. One study by Iguchi, suggests that, in the case of temporary immigration, the fiscal benefits would be larger than the costs for Japan assuming the foreign workers stay in Japan only temporarily. In addition, according to Organisation for Economic Cooperation and Development opinion polls, attitudes toward immigration in Japan are broadly in line with those in other OECD countries. This suggests that the obstacles to introducing a temporary guest workers program, such as that found in other advance countries, are not insurmountable.